The Virtual Protest for the Freedom of Tal al-Mallouhi 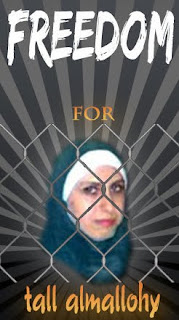 Amnesty International: Syria must release blogger at risk of torture

Amnesty International has demanded the release of a 19-year-old blogger and student detained in Syria without charge or access to the outside world since the end of last year.

The woman, Tal al-Mallohi, was detained by Syria's notorious State Security in the capital Damascus on 27 December after being summoned there for questioning.

Since 27 December none of her family has been allowed to see her. The family's visits to the State Security detention centre have been met with vague assurances of her wellbeing but no information as to why she is being held.

There are fears that - like many other prisoners held in Syria - Tal al-Mallohi is at high risk of torture.

The family suspect her detention may be related to poems and articles published on her blog - http://talmallohi.blogspot.com - as some of these contain references to Syria's restrictions on freedom of expression.

"This is a deeply disturbing case. No-one should be detained just for discussing freedom of expression and if this is why Tal al-Mallohi is behind bars then it's an absolute disgrace.

"The Syrian authorities should release her or charge or with a recognisable criminal offence.

"To have been held so long in incommunicado detention in Syria, where torture and other ill-treatment is widespread, is doubly troubling. Her family and lawyer should also be granted immediate permission to see her.

"Tal al-Mallohi is frail and already suffers from abnormally accelerated heart rate (Tachycardia), and there are real concerns for her health. At the very least she must be allowed the medical treatment she needs."

Tal al-Mallohi's family has spent the last nine months attempting to find out why she is being held and to gain access to her.

In addition to many frustrated attempts to see her at the Damascus detention centre, the family has submitted three written visitation requests to State Security and has sent two internet appeals to the Syrian President Bashar al-Assad urging him to intervene for her release.

As far as Amnesty International is aware, no response has been made to these requests or appeals.

Tal al-Mallohi's mother has told Amnesty International of her deep concern, saying: "I'm going crazy. I have had chronic insomnia since my daughter's arrest. I survive on sleeping pills."

After one fruitless attempt to see Tal al-Mallohi at the detention centre her mother - who was in a distressed state - was hit by a car outside the building and suffered serious injuries which hospitalised her for two months.

There are severe restrictions on freedom of expression in Syria and in recent years there have been several cases of people being jailed for their online publications and related activities.

These include Kareem 'Arabji, a blogger who was jailed for three years for moderating an internet youth forum (he was later released under an amnesty), and seven men - 'Allam Fakhour, Ayham Saqr, Diab Siriyeh, Hussam 'Ali Mulhim, Maher Isber Ibrahim, 'Omar 'Ali al-'Abdullah and Tareq al-Ghorani - who were sentenced to lengthy prison sentences for their part in developing an online youth discussion group and publishing online articles advocating democratic reform. Their convictions relied on "confessions" the men insist were extracted under torture.

Amnesty International has previously documented 38 different types of torture and ill-treatment used against detainees in Syria and the organization has received hundreds of reports of detainees being tortured.