We have been following with great concern the arrest and detention of Tal Malouhi, Syrian blogger and student, since late December 2009. We urge Syrian authorities to release her immediately and guarantee her safety and the safety of her family. We also hope that the international community and humanitarian organizations in the region and around the world would coordinate their efforts to pressure the Syrian regime to release Malouhi and others who were arbitrarily detained.By signing the International Declaration of Human Rights, Syria became obliged to guarantee the freedom of expression of Syrian citizens. Authorities must not arrest or harass citizens for their opinions which they might express using any medium of their choosing. Citizens must not be jailed after mock trials carried out by the Supreme State Security Court instead of a fair trial in a civilian court.

The forced disappearance of an ill 19 year old girl, preventing her from taking school exams and her preventing her family from knowing where's she's being held or visiting her, is a crime that its perpetrators should be held accountable in front of a court of law. It's a disgrace that the writings of this young girl on her three blogs, support of the most vulnerable people in the region and around the world, would be the reason for torturing her behind bars.While we commend the latest report of the United Nations Special Rapporteur for Human Rights, we call unto them to add an appendix documenting cases of arbitrary arrest and enforced disappearances including the case of Tal Malouhi and dozens of minors under the age of twenty .

We call on Brigadier-general Ghassan Khalil, head of the Information Branch of the State Security Administration, to immediately and publicly disclose the fate of this girl. We hold the Syrian security apparatus responsible for any physical assault Malouhi might have suffered during the period of her arrest .The Syrian regime, which seeks to improve its foreign relations and to restore the path of negotiating the European partnership, should not forget that its shameful record on human rights will be available to everyone before any agreements which they seek to sign.We urge public figures and Syrian organizations operating in the country to intensify efforts to unveil the the whereabouts of Tal Malouhi, and demand her immediate release, as well as providing her with much needed psychological and medical care.We commend the call upon human rights movements in the region and around the world to mobilize protests in front of Syrian diplomatic headquarters globally.
Furthermore, we are thankful for all the efforts to defend this helpless youth against the crimes of the regime.We urge you to intervene by using all legal and diplomatic channels and continuing to pressure the Syrian regime for the release of Tal Malouhi and all prisoners of conscience in Syria.12 September 2010. 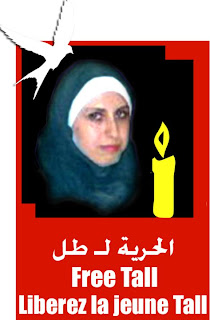